keybrd library is an open source library for creating custom-keyboard firmware. The keybrd library allows keyboard designers to develop and publish their firmware simply as possible.

Multiple-layer keyboards can write symbols without using the shift key:

keybrd library leverages the Arduino environment to create keyboard firmware. The Arduino development environment is free, and easy for novice programmers to setup and learn.

The keybrd library is in Beta testing. The public API should not be considered stable.

A minimal keybrd sketch is 40 lines of code for a 4-key keyboard. It scans a key matrix just like the big keyboards. The sketch is small because the keybrd library takes care of the low-level details. It runs the breadboard keyboard in this picture.

The keybrd_DH sketch is a showcase of the keybrd library’s capability. It emulates the DataHand keyboard, which has the most complex layout I know of. Its layout has 52 keys, 3 primary layers, 5 sub-layers, 2 matrices, 8 LEDs, and blinking LEDs. Most layouts are much simpler. keybrd_DH and its instantiation files contain about 800 lines of code. 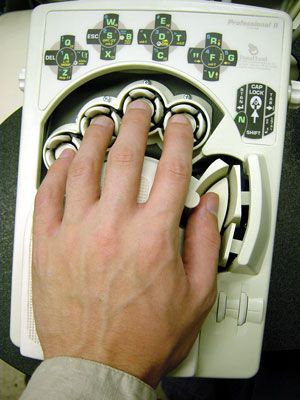 Guides and tutorials are provided.

keybrd tutorial_1 shows how to build a breadboard keyboard. The remaining keybrd tutorials show how to create custom keybrd firmware.

Please ask questions in keybrd firmware library thread if something is not clear.